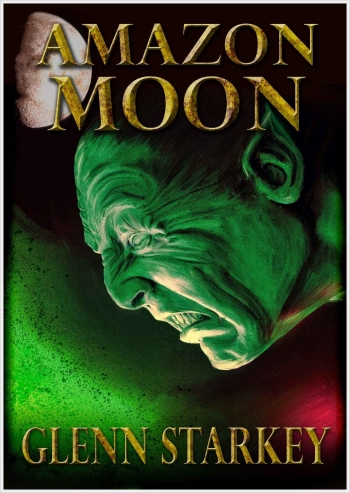 Amazon Moon, Glenn Starkey’s fourth published novel, has just been released. The novel has his signature action, adventure and realism, but is his first venture with sci-fi elements. The novel’s cover alone sparks a reader’s interest yet following his protagonist, John Alvarez, through a turbulent life, war and prison is only a taste of what’s to come. It’s when Alvarez enters the Amazon jungle that a reader feels the extremes of insanity thrust upon him. The question is then raised: “What if all you had believed in and learned was suddenly discovered to be false?”

John Alvarez was a bad boy—so bad that a judge finally gave him a choice between prison and the Marines, yet in the Corps he discovered a home. Shipped off to Vietnam, he leads his own band of bad boys—Iron Raven, the terror of their enemies and always the first choice for a dangerous mission. On one such mission, the brain child of a couple of CIA ops, Alvarez and his squad are cut off from escape by their CIA handlers and are left to fight their own way out or die.  Only Alvarez survives, and his revenge on the men who abandoned him and his friends, lands him in prison for life.

After twenty years he’s offered freedom, but only if he agrees to undertake another suicide mission:  to act as bodyguard for a Mr. Standish on a journey into a mysterious Amazon kingdom ruled by the devil himself.  It is only in the heart of the jungle that Alvarez discovers he is on a mission that can only have two endings—redemption or death.

Upon completing Amazon Moon , Glenn wrote My Journey with Amazon Moon, an essay you can find on his website. In it he states the novel led him down many soul searching paths, and how his research actually made him take a different writing direction than originally intended. The essay is well worth reading from a humanitarian viewpoint.

“Amazon Moon is the sort of novel that grabs you by the throat on the first page and doesn’t let go until the last.  It is an exciting story and, at the same time, something more.  It is a fable about one man’s redemption, his rediscovery of innocence.” ~ Nicholas Guild, New York Times Best Selling Author , The Assyrian, The Berlin Warning, The President’s Man

“With Amazon Moon, Starkey has done it again– lured me in, set me up and wrung me out! Splendid.” ~ Jeff Mudgett, Author of Bloodstains

Glenn Starkey is a former USMC Sergeant, Vietnam veteran, Texas Law Enforcement officer and retired from a global oil corporation as a Security Manager. He now lectures on a variety of subjects, having been a security consultant, and worked on an interim assignment as Security Director of a major Gulf Coast port to improve their security and federal projects. Along with his writings, for the last three years he has volunteered to work with school children to improve their reading skills. He lives with his family and a 98 lb Labradoodle in the Houston, Texas area. You can contact him via his website and find a complete listing of his novels on Amazon.com and other major online booksellers.