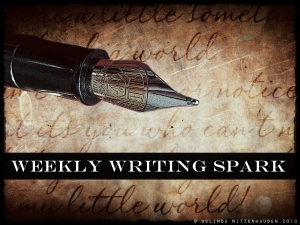 “And above all, watch with glittering eyes the whole world around you because the greatest secrets are always hidden in the most unlikely places. Those who don’t believe in magic will never find it.”  ~ Roald Dahl

You’ve had a strange feeling over the past few weeks, something seems oddly out of place.  There is a weird energy that seems to be surrounding you now in one of your favorite haunts. As far as you’re aware, nothing significant has happened there… but something just feels different.   What could be causing this strange feeling? Write about what it could be. Is it something magical? Something  otherworldly or…? Get creative, write and have fun! 🙂

© Belinda Witzenhausen, 2009-2021. Unauthorized use and/or duplication of this material without express and written permission from this blog’s author and/or owner is strictly prohibited. Excerpts and links may be used, provided that full and clear credit is given to Belinda Witzenhausen with appropriate and specific direction to the original content.