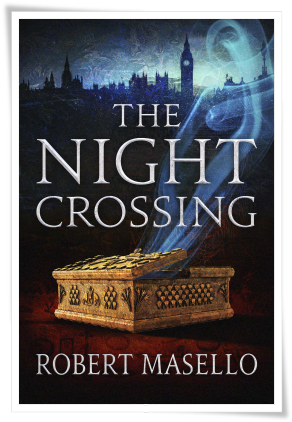 I received a complimentary ARC copy of  The Night Crossing
by Robert Masello from NetGalley and 47North in order to read and give an honest review.

The Night Crossing is a well written and intriguing gothic novel that blends historical fact, paranormal twists and a mystery, to create a tale that will keep you flipping pages. There are three main plot lines running through this story which all blend together into a fantastical tale that takes a very unexpected tangent about two-thirds the way through the book.

Following in her father’s footsteps, Egyptophile and archaeologist Mina sets out on an expedition to the Carpathian Mountains to visit and document a mysterious phenomenon of a Sphinx which when the sun sets appears to come to life. Mina and her guides climb a mountain to get a perfect vantage point to capture a photograph of the Sphinx. After getting the shot they start on the journey down the mountain when an unexpected storm forces them to seek shelter in a cave. Too dark to continue they decide to set up camp in the safety of the cave. Mina awakens to find two of the guides have abandoned them during the night. She retraces their footprints which leads her to the back of the cave where a skeleton whose hands have been damaged after an artefact of some sort had been forcibly removed.  Mina finally tracks down the artefact, a mysterious gold box, to a gypsy camp but when she arrives they are in the throes of the funeral and can’t give Mina back the box quickly enough.

Aspiring writer, Bram Stoker working as the manager of the Lyceum Theatre in 19th century London has his life turned upside down when he stops to rescue a young waif, Lucinda, who has jumped off a bridge on the Thames River in an attempt to take her life. Being a kind gentleman, he continues to care about this young woman, her body ravaged by chemicals from working making matches in a mission house where she and her son resided. Lucinda’s suicide attempt was a result of being distraught over the death of her young son Davey and the guilt she feels not knowing what happened to his body. Stoker becomes a friend and a father-like figure to her and offers her kind words and support. When Lucinda returns to work at a mission house she is intent to find out what happened to the body of her son, but nothing can prepare her for what she finds.  When Mina, Bram and Lucinda cross paths, a family-like bond is formed and together they fight an evil that could be the death of them.

In Night Crossing, Robert Masello creates an interesting well-rounded cast of characters with a few familiar names such as Sir Arthur Conan Doyle and the “Unsinkable Molly Brown”. I was impressed by the intelligence, strength and resiliency displayed by his female characters as well as genuinely evil villains who the reader can’t help but despise. The author also tackles some of the social issues prevalent at the time such as racism and sexism which he addresses accurately and with class.

As a writer, I also enjoyed the way Mr Masello gives us insight into the fictional inspiration behind Stoker’s Dracula. Although I found the tangent as well as the time jump of 19 years a bit frustrating at first, I eventually grew to appreciate the author’s unique way of tying two very different storylines together making it fairly cohesive once it unravels.

All in all an interesting read that I would recommend to those looking for a gothic thriller with threads of the paranormal.