*originally posted on my blog Ignite Your Creativity : http://igniteyourcreativity.net/ 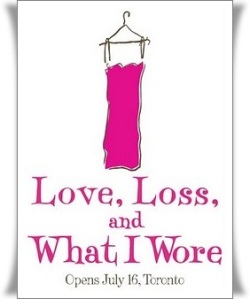 I was recently invited to go see the play “Love, Loss and What I Wore” at the Panasonic Theatre.  To be honest I am far from being a “fashionista” and wasn’t sure what to expect, but I accepted the invite and I am so glad I did.  Based on the book by  Ilene Beckerman, Norah Ephron (When Harry Met Sally) and Delia Ephron (Sisterhood of the Travelling Pants) created a quirky yet sweet production featuring vignettes and monologues based on pieces of clothing and the memories attached to them.  From homemade dresses made by mother and first bras, to finding the perfect wedding dress, “Love, Loss and What I Wore” is a play that every woman can relate to.

Louise Pitre, Andrea Martin, Paula Brancati and Sharron Matthews all gave stellar performances, but the one stand out of the night for me was Mary Walsh.  Known for her comedic talent, Walsh delivered a poignant and touching monologue about breast cancer, which was so genuine it moved me to tears yet finished with such a note of inspiration.

Another major surprise for me was my husband, whom I had brought with me and feared would be snoring, was actually immersed, as were most of the men present. “Love Loss and What I Wore” was uplifting, funny and moving throughout and I would highly recommend it.  The performance was outstanding as was the Panasonic Theatre and their incredible staff. I would like to say a special thank you to Hubert Hsu for the opportunity.

“Love Loss and What I Wore” is currently running at the Panasonic Theatre (Toronto) until September 4th and will feature a rotating cast July 16th  – August 7th : Andrea Martin, Sharron Matthews, Louis Pitre, Mary Walsh and Paula Brancati, August 10th – September 4th:  Wendy Crewson, Lauren Collins, Cynthia Dale and Margot Kidder .  For more information check out their website at http://lovelossonstage.ca/ and make sure to follow them on twitter @lovelosscanada.

Net Galley #BookReview On Spine of Death, By the Book Mysteries #2 by Tamara Berry #cozy #mystery

#NetGalley #BookReview Egypt’s Golden Couple; When Akhenaten and Nefertiti Were Gods on Earth by John and Colleen Darnell #AncientEgypt #Egyptology